Being dismissed as a PA, expected to leave and start a family, or being told they couldn’t compete with men are just some of the challenges female brokers say they were faced with when they first joined the industry.

While many say the issue of gender balance has improved over the past year, one finance broker suggests it’s an issue that was overlooked by the royal commission.

According to a report released by the MFAA last year, the number of female brokers peaked in the period April to September 2017.

It reduced slightly in the period following that, but the numbers were still higher than previously. However, while the proportion of female brokers has declined, the number of brokers overall keeps rising.

Across industries women continue to earn less than men, are less likely to advance as far as men do in their careers, and accumulate less retirement and superannuation savings.

In the finance industry, women are hugely under-represented at an executive level.

Only 15% of high-level positions are held by women, compared to 85% held by men, says Dixon.

Yet the issue was not touched upon during the royal commission.

“In our view, gender equality is an extremely important conversation, and we believe it has a significant role to play in creating the cultural change we seek in financial services,” says Dixon.

“Businesses that are diverse, both in gender and culture, have a greater ability to connect with their customer base and deliver better outcomes across the board, including productivity.”

But female brokers are not only dealing with fewer promotions and lower salaries. There are stigmas that women face in such a male dominated environment as the broker industry.

Director of Calculated Lending Bianca Patterson started out in broking in 2011 when she was 26 years old, with no experience of lending or banking. She says she remembers “feeling disheartened” in those early days. “One of my greatest challenges back then was trying to forge relationships and build rapport within the industry,” she says.

“There were times I was dismissed as being someone’s PA, or was told I would make some waves but would then disappear either to start a family or leave the industry like almost 50% of the new-to-industry brokers did.”

“Gender equality is an extremely important conversation, and we believe it has a significant role to play in creating the cultural change we seek in financial services” Brendan Dixon, Pure Finance

While Patterson believes the industry has made great strides in the last 12 months, she still hears experienced industry members speak the same way, and she wants it to end. “Our industry and roles are tough enough right now; the last thing we need to do is discourage each other,” she says.

The industry is not standing still on the matter.

An industry-wide initiative is being led by the MFAA, and individual groups are doing their own bit. Patterson has taken part in the MFAA’s Opportunities for Women program, which she says has started a great conversation. While the number of groups involved in the initiative has been a “positive sign”, some negative comments and attitudes have shown that there are still boundaries and stigmas to work through.

It is important to note that not every male in the industry has those attitudes, as Dixon’s comments illustrate. Astute Ability Group principal Mhairi MacLeod started her own business in 1998 after about five years in the motor trade, in which she worked as a finance and insurance business manager.

She remembers receiving a negative response from male peers and being told she would never be as successful as a man in that environment, but she also found many that men were very supportive.

Fast-forward to today and MacLeod says she’s proud of how far the industry has come.

While it may still be male-dominated, MacLeod says she doesn’t consider broking to be a ‘man’s world’. “It’s an industry in which women can enjoy tremendous success, and there are many fantastic female role models in our sector,” she says.

“The industry is also very inclusive, and work is being done to remove barriers to diversity.”

Despite the improvements, she knows there is more work to be done. She says the falling proportion of female brokers is significant given the important role of women as customers. Studies across the globe have suggested that in the average household women either directly make or influence 80% of all purchasing decisions.

“This is why we have to look at ways to attract women to the industry, particularly given the negativity about the financial services sector arising from the Hayne royal commission,” MacLeod says. 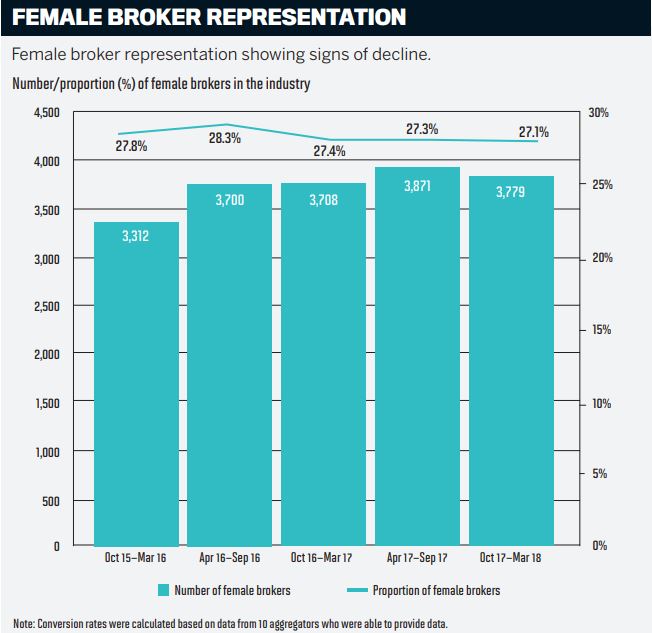 “We also need greater resources and programs that would enable women to seek more support and involvement.” An example of how females are moving into more executive roles is seen at Mortgage Choice, which not only has a female CEO but a female chair and a leadership team including female executives.

The broker group has a strong contingent of female franchise owners and is continuing to actively encourage and support the recruitment of women to the industry, says CEO Susan Mitchell. She says broking allows women to work to a schedule that suits their needs, as well as to use strong interpersonal and relationship management skills.

“Over the years, we have seen a number of our strongest female broking business owners come through the ranks as loan writers or become successors within the same business,” Mitchell says.

New recruits to Mortgage Choice can benefit from a support network helping brokers through the challenges they may face early on in their careers.

“As with all new recruits to our network, we partner them with a mentor who can support and guide them to their success and help navigate the challenges faced in the current environment,” Mitchell adds.

“Mortgage Choice’s female brokers can benefit from participating in our state-based franchisee groups, which provide marketing and business support. Joining a business network is also an inexpensive way to source new opportunities, build your customer base and source quality staff, while sharing and learning from experiences.

“I encourage women to get into the habit of regularly attending breakfasts, seminars, lectures and lunches that are held by relevant groups, to build their personal network and reap the rewards a diverse contact book can bring.”

One of the other big challenges for women in broking is the prospect of taking time out to have a family. While this is not for every woman – some may not choose to start a family and others find solutions that let them continue working – there are many who want to take the time out with their children.

Julianne Walsh, a BDM at Liberty Network Services, says a big challenge for many of the brokers she works with is that so much can change in the time they take out. Even in the past year there have been changes to remuneration structures, policies and regulations.

“It was definitely a male-dominated sector. I’m proud that more women have become brokers and are highly involved in the industry at senior levels” Mhairi MacLeod, Astute Ability Group

“Education, good communication and support is a strong place to start in addressing it,” Walsh says. “If a female is returning to the workforce after having a family or starting a family, that’s a lot to take in within such a short period of time.

I think that’s obviously when we have noticed a decline, with either women leaving the industry or not getting the pick-up of women coming into the industry.” Liberty has also been involved in the MFAA Opportunities for Women initiative.

The non-bank has impressive figures, with 44% of staff being female and 55% of females promoted compared to males. Walsh, who started in financial services in 1998, knows there are challenges but wants to remind women that there are also rewards in broking.

“It’s hugely rewarding and there’s a lot of support and it’s ever-increasing,” she says. “From my perspective we’ve got 38 female brokers and we’d welcome any new females entering the industry; we’d definitely love to increase them. All I can say is there’s an awareness that the change is happening.”

While she recognises the change, Walsh believes there’s more to be done. “I think it has to be owned by all the different bodies,” she says.

“We have the MFAA and they’re listening to the challenges, but it has to go further than that. Aggregators have to take ownership and start recognising and holding more local support groups for women or those starting in the industry.

“We see specifically with women that they do stop to have a family or they do stop for a variety of reasons, and coming back into that workforce can be scary. There’s a lack of confidence potentially and we have to have that support structure there.”