Mary Ploughman began her career in what would become securitisation in Macquarie’s structured ­finance department. For over 11 years Ploughman climbed the ranks to the position of director of corporate ­finance and leasing. She arranged funding for clients and helped develop Macquarie’s thriving securitisation business. In 1992, the bank won the IFR Deal of the Year for its work on the securitisation of the water rates of Melbourne Water. “At that time, Macquarie was a very exciting place to work. It encouraged innovation and we worked on what was the start of the securitisation market in Australia.”

After taking two years’ maternity leave, Ploughman worked part-time at Price Waterhouse Coopers as director of securitisation. For three years, she advised customers on how to achieve their funding needs. “That was when I was advising RESIMAC as a client. It was a good gig, but consulting was not really my thing. The RESIMAC CEO said to me, ‘We can’t do it ourselves’, and offered me a job over lunch.” 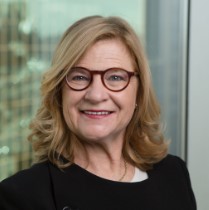 Since joining RESIMAC as a director, Ploughman has helped reverse the lender’s funding. She oversaw the purchase and growth of a New Zealand subsidiary, and led other mergers and acquisitions in Australia and New Zealand, including the purchase of the $1.8bn RHG portfolio. “The ­ first three to four years were about rebuilding trust with banks and investors, and building the funding program. Then the GFC hit and it was about how we would survive. Then came the growth years, the mergers and acquisitions. This has been the most exciting time in my career, but it was very hard work. We now have an opportunity to put our foot on the accelerator and become known as a great financial institution. That is what motivates me.”

In 2016, Ploughman was appointed to the RESIMAC board and was integral to RESIMAC’s merger with non-bank lender Homeloans in the same year. She was appointed joint CEO of Homeloans following the merger. “People thought I was crazy joining Resimac at the beginning when it had so many problems. But when something is difficult, you have a real opportunity to make a difference.”

2018 and beyond: A NATURAL EVOLUTION

Two years after merging, the Homeloans and RESIMAC non-bank lending brands have uni­fied under a new incarnation of the RESIMAC brand. Ploughman says the move reflects the entities’ history as challengers and innovators in the market. “It really is taking the best of both worlds, and we are con­ dent it will help take our business to the next level.”

“I absolutely love what I do. Debt capital markets are my passion, using the assets we have to raise funds efficiently. My other favourite thing in the world is mentoring young women in their careers. It has been very satisfying”