The industry reacts to the election results

The mortgage broking industry collectively breathed a sigh of relief last month when the ‘surprise’ results of the federal election were announced.

While all polls had suggested a clear win for Labor, the right voters turned out on the day to secure another term in government for the Liberals.

This means brokers are not facing the removal of trail next year but also that other policies criticised for being detrimental to the housing market will not come into play.

The hard work by the broking industry will not stop there, however. While the Liberal proposition was certainly better for broking businesses, there is still going to be a consultation in three years’ time to look at the impact of removing commissions.

“Now is not the time to rest on our laurels,” wrote Mike Felton, CEO of the MFAA. The association outlined its plans to continue working with the government and Treasury to ensure the best interests of the broking industry and, ultimately, borrowers. 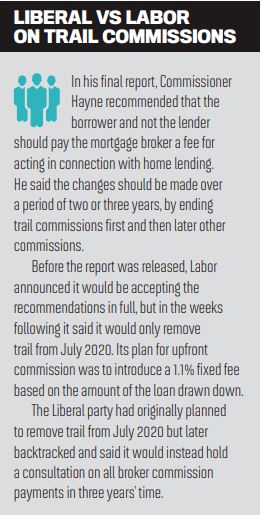 In the week leading up to the election, brokers became more vocal in their last-ditch push to inform customers and stand up for the industry.

Speaking after the results, managing director of 1st Street Financial and former MPA number one broker Jeremy Fisher said it was a “great outcome”, but it was not over yet.

“We now need to continue to work with government – and in particular Treasury – to ensure there is continual engagement and accountability upheld so that what was agreed upon is honoured,” Fisher said.

“Best interest duty needs to be adopted and rolled out, plus – and most importantly – we need to make sure that remuneration is no longer a concern or topic in three years’ time.

To do this, our industry needs to prove the current model is most appropriate for all stakeholders. We definitely can’t be doing nothing – now is the time to step up.”

After the Liberal win, experts began downgrading the risk to the property market; UBS economists expected buyer sentiment to stabilise.

“Our industry needs to prove the current [remuneration] model is most appropriate for all stakeholders … Now is the time to step up” Jeremy Fisher, 1st Street Financial

RiskWise Property Research CEO Doron Peleg said fears of a Labor win had had a major impact on buyer sentiment, particularly among investors, who saw residential properties as depreciating assets. Labor’s loss had eliminated the “number one risk to the property market”, he said.

“What we saw happening was the proposed changes have, rightfully, had a major and tangible impact on buyer confidence.”

The Property Investment Professionals of Australia also celebrated the news that the risk to negative gearing was gone.

Chairman Peter Koulizos said it had always been a poor proposal, but even more so in the underwhelming property environment.

“Creating an us and them campaign by classifying all landlords as ‘greedy’ also did the Opposition no favours when the vast majority of property investors only own one property and are just trying to improve their financial futures,” he said.

The Coalition government announced ahead of the election that it would be introducing a new first home buyer scheme.

The initiative could see first home buyers only needing to save a 5% deposit rather the usual 20%.

While some have criticised the plan as being ineffective, others in the banking and broking industry have praised it.

As buying a first home “is a rite of passage for many Australians”, and saving for a deposit can be difficult, the scheme will make it easier for many Australians to enter the property market sooner, according to Customer Owned Banking Association CEO Michael Lawrence.

“The proposed [FHB] scheme is a positive for mortgage brokers who can competently guide the first home buyer through a range of alternatives” Matt Lawler, Loan Market

By preferencing smaller banks, the Prime Minister is acknowledging that Australians should look beyond the big four,” Lawrence said.

Executive director Matt Lawler added, “It is generous, albeit capped to a certain number each calendar year.”

Only 10,000 borrowers each year would be eligible for the reduced deposit rate.

“FHBs have been the sector that has found it most difficult to enter the property market in recent times. Property prices have come off in the last 12 to 18 months but are still high by historical standards,” Lawler said.

“The proposed scheme in a Liberal government context [will] be a positive boost to a lagging property market suffering from declining values, tightening credit available to would-be purchasers and negative sentiment from the Labor government’s proposal to eradicate negative gearing for existing properties.” He also said the scheme would positively impact mortgage brokers.

“FHBs are more likely to turn to mortgage brokers for advice than going directly to the bank or alternative lender, so the proposed scheme is a positive for mortgage brokers who can competently guide the first home buyer through a range of alternatives to get them the best possible outcome.”