For the third year in a row, Top 100 broker loan values dropped

Total figures may have dropped this year, but the Top 100 are still optimistic about the future of broking

While value and volume have become ‘bad words’ in the broking industry of late, they still count for something. There are a lot of insights to gain just by tallying the figures and analysing the data, which is one of the many reasons we have continued with the Top 100 listing. The numbers tell us things that words can’t always do.

Not only is it an important way of recognising and learning from the accomplishments of some of the most productive and efficient brokers in the market, but it also gives us a better understanding of how the industry’s top participants are handling the latest onslaught of challenges. And if the top are feeling the pinch, then imagine how those at the bottom are doing.

This year’s figures have dropped across the board, which proves what brokers have been telling us: as lending gets tighter, their jobs get tougher. They’re putting in more hours and more money per file to get the deal across the line. At the same time, the increased compliance demands have forced them to become more streamlined, consistent and thorough, which will produce better customer outcomes.

Despite the current environment, these brokers know they’re still doing well in the grand scheme of things. Many of them have the advantage of years of experience, knowledge and connections, so they don’t have to worry about pounding the pavement and knocking on doors like their younger or newer counterparts must do.

While numbers are an important indicator of progress and success, they will never show us the whole picture. Many brokers have pointed out that regional brokers have no chance of making it into the Top 100 despite how successful they are, because their loan sizes will never match those of a broker working in Sydney. That’s a fair comment, and something we need to work out how to accommodate.

To those reading the interviews on the following pages, it will quickly become clear that, while the numbers these brokers are pumping out may not be attainable for everyone, they are in many ways just the same as the average broker: they want to help their customers achieve their goals and realise their dreams.

Among this year’s Top 10, there were three newcomers, and only three brokers who managed to increase their loan volumes from last year. The No. 1 broker’s total dropped by more than $36m, while the rest saw their totals drop by between $8m and $20m.

While last year’s overall decline could be explained by APRA’s macroprudential measures taking their toll on property investors – a crucial niche for many of the Top 100 – this year’s biggest challenges have been tighter credit conditions as a result of the royal commission, and a cooling property market.

That scrutiny of the banks has been passed down to brokers in the form of anxious credit assessors who are demanding they provide more paperwork, more proof, and more answers, sometimes to no avail. The application may still be declined, sometimes for preposterous reasons. One broker told MPA about a situation in which the bank claimed the broker was lying because a photograph from the valuation showed a swing in the applicant's backyard, which the bank took to mean the borrower had a child, which hadn’t been disclosed. 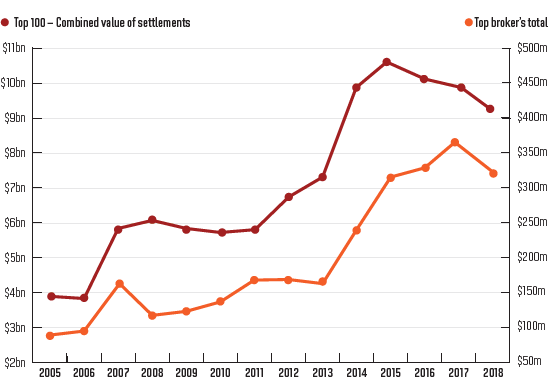 To make sure these misunderstandings don’t stump the approval process, brokers continue to spend more time and money per loan application. Some of the Top 10 said they had become more ruthless about who they accepted as clients, because they needed to be sure it would be worth their time.

With the big four banks less willing to lend for a variety of reasons, brokers are looking to non-banks and smaller lenders instead. There is one silver lining to this: it’s forced brokers to truly utilise the panel of lenders they have access to, reinforcing their value to borrowers. Despite the June 2018 quarter coinciding with the royal commission, brokers still settled 53.9% of all new residential home loans, the strongest June quarter yet.