In the face of a recession

After a difficult year in which businesses have been forced to close and Australians encouraged to stay inside, it’s no surprise that Australia’s GDP has suffered. At the start of September, figures from the ABS confirmed that GDP had dropped consecutively for two quarters, putting the country into a recession.

The three months to June saw the largest quarterly fall since records began in 1959, with a 7% decrease in GDP. The biggest drop recorded before this was just 2% in 1974. This June quarter decline followed a 0.3% drop in the March quarter, when the country first felt the impacts of travel and social restrictions. Spending on services declined 17.6%, with falls in transport services and operation of vehicles and hotels, cafes and restaurants.

ABS head of national accounts Michael Smedes said, “The June quarter saw a significant contraction in household spending on services as households altered their behaviour and restrictions were put in place to contain the spread of the coronavirus.”

On top of that, imports of services fell by more than 50% and exports declined by over 18%. While it was a positive that Australians spent less money and the household income-to-savings ratio rose to 19.8% from 6%, hours worked fell by a record 9.8%.

True impact yet to be felt

While GDP growth was somewhat affected during the GFC, Australia didn’t experience the recession seen in other parts of the world. Likewise, unemployment rose only slightly from 4.3% in mid-2007 to a high of 5.9% in May 2009 before dropping back down again.

Other effects of the GFC were felt, however. S&P Global data shows that mortgage arrears peaked shortly after the GFC, with prime mortgage arrears rising to 1.69% and non-conforming arrears to 17.09%.

This time around, arrears are expected to reach much higher levels, given higher unemployment rates and loss of income, said Erin Kitson, director, structured finance, at S&P Global. While unemployment levels in June were still not as high as in the 1990s recession, she said the real figures were probably being masked by the JobKeeper stimulus. In fact, the government has acknow ledged that the effective rate is 9.9%.

“Refinancing your home loan on to a lower rate, repayment buffers, all of these measures help to protect against debt serviceability pressures” Erin Kitson, S&P Global

The same can be said for mortgage arrears, which are currently being insulated by payment relief measures.

“We can’t yet see the impact from a debt serviceability perspective of COVID,” Kitson explained. “We think we’ll probably start to see that towards the end of this year and certainly more into Q1 next year, with the losses and so forth likely to come through or the more severe or advanced arrears likely to surface as a result of COVID more towards the second half of next year.”

Although some economists are forecasting a quick recovery for the economy, S&P Global’s RMBS Performance Watch suggests that the delayed real numbers for job losses and mortgage arrears will mean recovery may take longer than expected. But while this outlook is negative, Kitson said the measures that have been put in place should help borrowers.

“Refinancing your home loan on to a lower rate, repayment buffers, all of these measures help to protect against debt serviceability pressures in the coming months,” she said.

“There’s still a lot more to be unveiled, particularly when the fiscal stimulus measures have tapered off and mortgage repayment relief measures expire, but so far the household income with JobKeeper, access to Super and low interest rates have certainly helped households to manage their way through this.”

There are other positives to note, too. Kitson pointed out that thanks to the increased regulatory push and guidelines around debt serviceability, the proportion of high-LVR loans is much smaller these days, as well as the number of low-doc loans written. This means the collateral is higher-quality and puts borrowers in a better position to be prepared for economic contractions.

“If you’ve got contractions in property prices, the more modest your loan-to-value ratio is, the more equity you have built up in your properties,” Kitson explained. 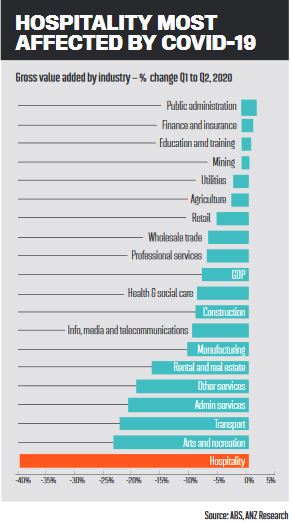 Looking to the future

While the decline in GDP was expected – as were the industries most affected – ANZ economists said it was further confirmation that “the COVID-19 pandemic is the largest shock to Australia’s economy since WWII”.

As the country looks to rebuild while still facing into the pandemic and the probability of continued repercussions, ANZ senior economist Felicity Emmett said, “Significant further stimulus over the next few years is likely be required to generate growth and jobs and drive the unemployment rate down.”

But not only has the income-to-savings rate grown during the pandemic but demand for new loans remains strong. ABS data shows that the value of home loan commitments rose by 8.9% in July as social distancing restrictions eased in most states and territories. First home buyers saw a particular boost, with a 14.4% rise in new commitments.

Aussie Home Loans CEO James Symond said that while COVID had put many households under pressure to meet their mortgage repayments, some homebuyers were taking advantage of opportunities to get a better deal.

“New home loan commitments are expected to continue in coming months, off the back of low interest rates, a variety of competitive deals and incentives from lenders, and the range of government initiatives and schemes now available to support first home buyers in particular,” Symond said.

“The very heavy competition amongst lenders, especially in their fixed rate products, indicates that loan volumes will continue to grow despite the economic and social pressures being placed on us by the COVID-19 crisis.”