Any broker will tell you that relationships with their customers are important to them, but for Deanna Ezzy, founder of More Than Mortgages, this is something that is really evident throughout her work.

Her commitment to her customers and the relationships she has with them was reflected in a recent experience she describes.

Earlier this year she had a phone call from the brother of a client; he wanted to help his brother with his financials while he was in hospital recovering from an illness. Over the following few months Ezzy had several conversations with them both, and just a couple of months ago the client called her to say hello and wish her luck during the pandemic. A week later, the client’s brother called to say he had passed away.

“It dawned on me that Chris had called me the week earlier to say goodbye before he died,” Ezzy says.

“I feel blessed and humbled by the experience. It was yet another example of how being a mortgage broker can often mean a lot more to people than you realise.”

Not every story is as poignant, but that doesn’t mean they’re not important. Ezzy spends time each month with her team, reading new reviews, and she has thank-you cards pinned up around the office.

“The physical cards are pinned up in front of us all day, also to remind ourselves that sometimes when things get a bit stressful or we’re feeling overworked (as all mortgage brokers do!), we can look up and be reminded of how much we’re helping and impacting our clients,” she says. 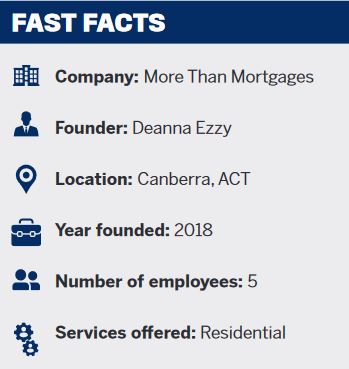 The idea for More Than Mortgages (MTM) came about in April 2017, and the brokerage began trading that November, out of the office of Ezzy’s previous employer in Deakin, ACT. A few months later she moved into a new office in Kingston; in fact, it was the same space in which she had first started with her previous employer.

“It was like coming home in a way,” Ezzy says.

MTM focuses on residential homeowners, with a clientele that comprises about 70% owner-occupiers and 30% investors.

Before founding MTM, Ezzy had spent several years at another Canberra-based brokerage as one of its senior brokers. Over a period of about five years she did around 70% complex lending deals, but as this type of lending took much more time per application, she made the decision to focus more on owner-occupiers in her new business.

“I find owner-occupier lending is more personal and emotional for the client, and I love being a support for people who are going through the homebuying process,” she says.

Now almost three years into running MTM, Ezzy has been right there for borrowers through the royal commission and now the coronavirus pandemic. Noting that the market is “forever changing”, she says the one thing these experiences have taught her is that nothing is guaranteed.

In Canberra the market has changed much less than in other parts of Australia, Ezzy says; houses show consistent and solid growth in most suburbs.

But she knows the current environment is posing different risks. With JobKeeper payments stopping and levels of continued lockdown meaning people can’t go out and work, many homeowners won’t be able to make mortgage repayments. Property investors are affected too, with many tenants unable to pay their rent.

The first thing she’s doing to prepare her business over the next year is ensuring that her processes are as systemised as possible. This includes changing the brokerage’s CRM system, implementing a document collection system and hiring more staff .

“I also want to focus on growing my current team, personally and professionally, by mentoring and offering support, guidance, training, and also feeding them leads so that they can grow their own client base,” Ezzy says. 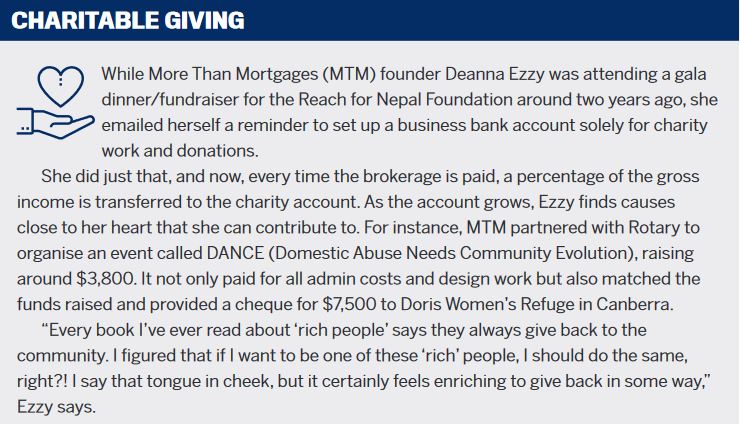