With the hearings of the Senate’s select committee into fintech and regtech now over, MPA looks at the opportunities that might come out of the inquiry for the fintech space moving forward

The Fintech space has continued to grow over the last five years, with more and more players coming into the sector and offering alternatives to Australian consumers – but who is regulating the market?

While some small business lender fintechs have come together to create almost their own form of accountability, there is also an inquiry underway to address issues like access to capital, skills, taxation, regulation and culture.

The Senate’s Select Committee on Financial Technology and Regulatory Technology began receiving submissions in October and held its public hearings in Sydney and Canberra in February. Fintech lenders have submitted their responses, with recommendations as to how the industry could be improved.

It is not just about improving the fintech sector, however. The CEO of ‘smart bank’ 86 400, Robert Bell, said this inquiry shows that the government is committed to ensuring technology can effectively help take the whole financial services industry forward, and there are particular topics that it will be helpful to talk about.

“We need policy support, we need protection from anti-competitive moves from the biggest financial institutions, and we need to ensure that all voices are heard on specific topics — notably the Consumer Data Right, open banking, the New Payments Platform,” Bell said.

“Consumers are hungry for technology-led approaches to help them make their biggest financial decisions – like saving for a new house or securing a mortgage — and this inquiry helps us start to overcome some of the barriers to get there.”

“We need policy support, we need protection from anti-competitive moves from the biggest financial institutions, and we need to ensure that all voices are heard” Robert Bell, 86 400

As part of its submission to the committee, Stone & Chalk said governments needed to provide more support and work closer with the industry to address concerns like the barriers to uptake of new technology, which can result from the difficulty of raising funds, and problems with procurement.

In its submission it said, “As a nation we need to better respond to the reality that we are in an Age of Disruption.”

OnDeck Australia launched in 2015 and may have had the backing and support of its parent company in the US, but it has still faced many of the same challenges as the rest of the fintech sector.

In a recent MPA roundtable, OnDeck’s head of marketing and partnerships, Ollie Wade, mentioned obstacles such as growing the company’s presence and managing customer expectations. He said that while he felt the government overall had been supportive of the fintech sector, there was more that could be done.

“Whether it’s through the securitisation fund or other initiatives, they have been supportive,” he said. “That said, government could do more, such as allowing more access to data (such as from the ATO) and support for mandatory comprehensive credit reporting being extended to commercial customers.”

Fellow SME lender Prospa submitted a response to the committee that outlined the barriers the company had faced, such as access to government data; regulatory risks and costs; a shortage of talent; and low adoption of alternative lenders.

As one of the first fintechs on the scene, Prospa was the first to join an aggregation 0 20 40 60 80 100 panel and has seen the fintech sector grow from being almost unheard of to becoming a genuine alternative lender to rival the mainstream banks.

The head of partnerships at Prospa, Alex Brgudac, said he commended the government for what it had done.

“This includes the appointment of a fintech minister, the creation of a Senate committee on fintech and regtech, and the establishment of the $2bn business securitisation fund,” he added.

“All of these help grow awareness and credibility of alternative lenders like Prospa, and additional government support will boost customer confi dence and consideration of our sector.”

“Government could do more, such as allowing more access to data (such as from the ATO) and support for mandatory comprehensive credit reporting being extended” Ollie Wade, OnDeck

The opportunities of technology 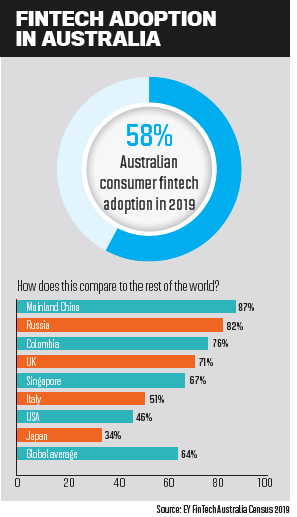 In 86 400’s submission to the committee, its key recommendation was to level the competitive playing field. Bell said the government had a role to play in ensuring there was scope for disruption and improvement within the banking industry.

“Allowing fintechs to innovate and take on incumbents fosters a broader culture of innovation,” he said.

Specifically, the digital bank wants the government to “elevate the importance of the fintech sector” to investing in the future and “ensure the smooth and timely introduction of new platforms or ecosystems”.

Bell said the opportunities coming out of the inquiry “are huge”, adding that both open banking and the Consumer Data Right would shift power from the financial institution to the consumer. He pointed out that these changes would enable faster and simpler mortgage approvals.

“Currently, any data that is created by consumers – for example, their transactions history, bill repayments and loan history – belongs to the banking institution where it resides,” Bell said. “We disagree with this. That data has huge potential to be used for the good of consumers, and we want to see consumers get the most of it.”

86 400 has already seen the use of data from other financial institutions benefit customers; the bank allows account customers to connect other bank accounts so they can see their whole financial picture in one place.

Its mortgage processes also use the technology to take a snapshot of an applicant’s income and each line of their expenses.