Ready to weather the storms

The path to broking is often a circuitous one, and Nathaniel Nhan Truong’s experience was no exception. Upon graduating from university, he obtained a graduate position in the wealth management division of a major bank. After four years of service he moved through a variety of roles, ranging from assistant to financial adviser, and eventually took on a remediation project. It was while Truong was involved in this project that he became aware of some of the more problematic aspects of the industry.

“I saw first-hand how bad advice and unethical practices were leading to poor customer outcomes,” Truong explains. “It was the driving force for my decision to leave the corporate sector in Australia and travel to London to expand my horizons in 2011.”

Truong was volunteering at a leadership conference in London in 2012 when he first heard in detail about human trafficking.

“It had a big emotional impact on me, and I felt I needed to respond,” he says. “But at the time, I wasn’t sure of the best way to contribute to the cause.”

Returning to Australia in 2013, Truong took another series of jobs in banking but eventually felt the pull of the broking life and in 2015 founded The Loan Lounge, a brokerage geared towards giving back to both the surrounding community and the wider world.

“When I founded The Loan Lounge I felt I could combine my skills in finance with a desire to make a difference,” says Truong. “We decided to do things differently and base it on a triple bottom line philosophy around people, planet and profit.”

The tagline the new company adopted was ‘Finance a difference’ – a principal enacted across clients, charities and the company.

“To achieve the mission over the long term and ensure a sustainable business model, we tested the idea around donating 10% of our trail to abolish slavery,” Truong explains. “We started in August 2015, and we’ve continued since then. Eventually we hope to give $1m a year sustainably.”

“Many people are wanting their voices to be heard; it’s a clear demonstration that our current status quo isn’t working” Nathaniel Nhan Truong, The Loan Lounge

Truong believes there’s a stark contrast between the state of the market in mid-2020 compared to when the firm was founded. In 2014/15, he says, brokers were beginning to gain a larger share of new home loans settled. The increasing complexity of loans and risk-averse nature of major lenders – even years after the GFC – meant that more lenders than ever required a broker’s services. 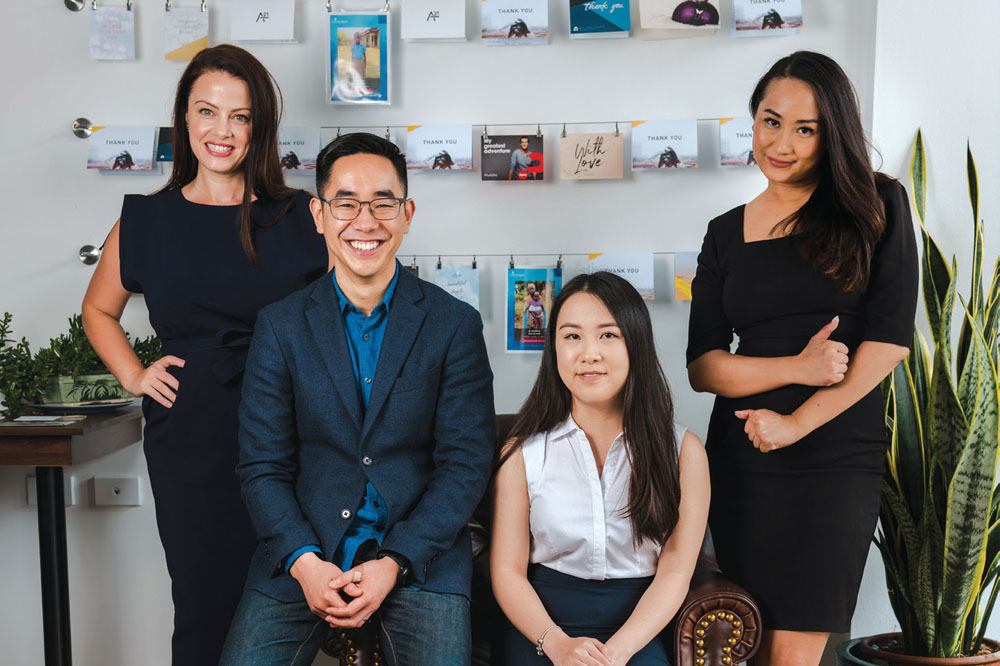 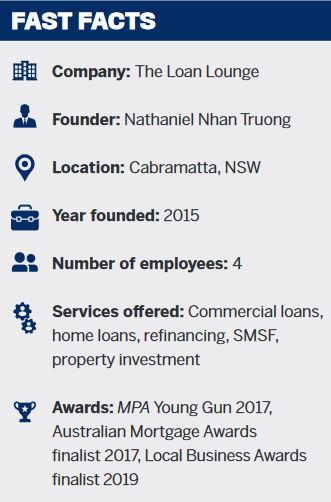 “We’ve seen a continuation of that trend, and we believe we’re valuable contributors to the community as a result,” Truong says. “So, in 2019 when the financial services royal commission occurred, I think there were a lot of brokers who felt unfairly targeted and vulnerable to the decisions of politicians.”

While Truong is a firm believer that brokers still have an important role to play in the home loan industry, he cautions that there is likely to be greater industry uncertainty and reduced confidence in the market, particularly in the face of wider world events.

“Obviously we’ve already had COVID-19 this year, and now we’re seeing increased unrest around the world,” Truong says. “Many people are wanting their voices to be heard; it’s a clear demonstration that our current status quo isn’t working. A shift is required.”

“We decided to do things differently and base it on a triple bottom line philosophy around people, planet and profit” Nathaniel Nhan Truong, The Loan Lounge

Additionally, Truong notes, Australia is likely heading into a recession. At the time of writing, JobKeeper payments and mortgage deferrals are scheduled to end in September 2020, which will probably have an additional effect of its own.

“Many brokers – including myself – don’t know what a recession feels like,” says Truong. “This will definitely affect the mortgage market as it influences market confidence, employment, housing demand, house prices and disposable income, among other factors. While the sustained low interest rates may have a positive effect on the mortgage market in terms of creating short-term demand, it’s not healthy in the long run.”

The next few months might appear daunting, and Truong says brokers need to make sure they look after their personal well-being and mental health.

“Obviously lots of brokers are solo operators, and this brings a unique set of mental, physical and emotional challenges in its wake,” says Truong. “We’re seeing really great strides in terms of productivity enhancers, like technology and work from home capabilities, but you need to ensure that you’re not just burning yourself out in the process.”

Over the next 12 to 18 months, Truong says, The Loan Lounge will have a number of areas of focus.

“Firstly, we really want to improve our internal systems and build an onboarding process,” he says. “We also want to strengthen strategic partnerships with key referral partners. Times are tough all over the world at the moment, but we want to be ready to help clients the whole way through.”