Ever since regulations were introduced a decade ago to regulate the provision of consumer credit, it has been a common complaint that banks have taken assessing living expenses to the extreme, lengthening turnaround times and making the workload for a broker much heavier than before.

Treasurer Josh Frydenberg is trying to change that, however, by suggesting reforms to remove “unnecessary barriers”.

The principles-based “one size fits all” framework originally implemented has become “overly prescriptive, complex and unnecessarily onerous on consumers”, he said, announcing a plan to reduce the cost and time it takes consumers and businesses to access credit.

The reforms include removing responsible lending obligations from the National Consumer Credit Protection Act 2009, with the exception of small amount credit contracts and consumer leases. Banks will continue to comply with APRA’s lending standards requiring sound credit assessment and approval criteria, but the reforms will allow lenders to rely on the information provided by borrowers, “replacing the current practice of ‘lender beware’ with a ‘borrower responsibility’ principle.

Putting the broker industry in a strong position

The industry has responded positively to the proposed reforms. The MFAA said in a statement that while there may have been a strong rationale for the NCCP principles following the GFC, they were “no longer fit for purpose”.

Combined with the uncertainty following the royal commission, the responsible lending regime has led to lenders combing through living expenses with no consideration for individual circumstances or the likelihood of borrowers changing their spending habits, and as a result the flow of credit has been restricted.

“Once these changes are implemented, we should begin to see faster turnaround times for qualified borrowers, which has been an increasing issue for lenders and a point of frustration for many of you, particularly this year,” he said. “These changes will leave the mortgage broking industry in a strong position, as the channel will now be further differentiated for customers beyond the experience, expertise, choice and convenience already offered by the channel.”

“We should begin to see faster turnaround times for qualified borrowers, which has been an increasing issue for lenders and a point of frustration for many” Mike Felton, MFAA

Naturally, the banks have also welcomed the proposed reforms. Customer Owned Banking Association CEO Michael Lawrence said customer-owned institutions had always been responsible lenders and did not need prescriptive and complex laws to lend responsibly, but he supported the announcement anyway.

“The government is right to take decisive action to promote lending at a time of great uncertainty and the biggest peacetime economic contraction since the 1930s,” Lawrence said. “This environment requires policymakers and all stakeholders to bring a new lens to all regulatory settings.

“There are multiple layers of regulation applying to lending, so simplifying these regulations while maintaining strong consumer protection, particularly for vulnerable consumers, is very welcome. This is good news for borrowers and lenders. Applying for a loan will be a simpler process.” 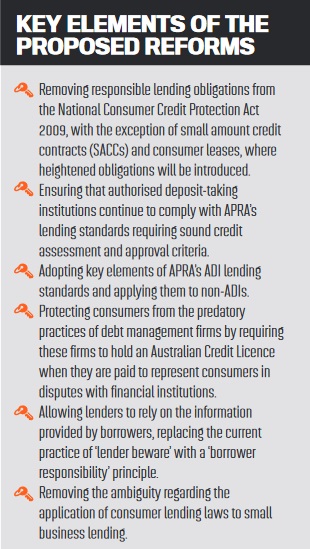 Australian Banking Association CEO Anna Bligh said it was important that the changes should strike the right balance between maintaining strong consumer protections and providing credit access to the economy.

“There are multiple layers of regulation applying to lending, so simplifying these regulations while maintaining strong consumer protection … is very welcome” Michael Lawrence, COBA

“Australian banks understand their role in supporting customers and rebuilding the economy. Ensuring the flow of credit to fami-lies and businesses, with the right customer protections, is paramount,” she said.

However, some groups have raised concerns about the reforms, saying they will do the opposite of protecting customers.

While some in the lending industry believe the royal commission created extra hurdles, the CEO of the Financial Rights Legal Centre, Karen Cox, has said the industry should be remembering and learning from it.

“Watering down credit protections will leave individuals and families at severe risk of being pushed into credit arrangements that will hurt in the long term,” she said.

Alan Kirkland, CEO of consumer group CHOICE – which has been somewhat critical of the mortgage broker industry in the past – commented that the reform plan had “disaster written all over it”.

“Piling more debt onto people who can’t afford it has never solved an economic crisis,” he said.

“Products like credit cards are complex. That’s why banks make so much money out of them. Banks are in a much better position to assess a person’s ability to repay, so they need to shoulder some of the responsibility.”

The government will consult publicly before finalising any legislation. In the meantime, you can find out more on the Treasury website.