SHAWN ALLEN is not your average broker.

He opened the doors of his company, Matrix Mortgage Global, during the GFC; grew his business to specialise in alternative financing; and now spends about $1m a year on marketing and advertising. In the last financial year, his company settled $389m, a figure that is unfathomable for most brokers. So, why haven’t you heard of him before? Allen is the CEO of a firm based in Toronto, Canada, but the broking magnate is coming to Australia on 5 June to be a keynote speaker at MPA’s second annual Broker Business Exchange.

While in Sydney, he’ll be talking to Aussie brokers and hosting a masterclass on how he grew his business into the staggering success story it is today during periods of turbulent change and regulatory reforms in the North American housing market – including the 2008 market crash.

Just as the severity of the US housing downturn was beginning to reverberate around the world, Allen – who became a broker in 2013 after a bad experience with one while buying his first home at 24 – decided to open Matrix Mortgage Global. The ripple effects were felt particularly acutely by the US’s closest ally and neighbour, Canada.

“Within a few short months, many lenders with huge market shares had closed their doors completely, and the money dried up,” Allen tells MPA.

Nevertheless, he says he had “an unshakeable belief” that he would succeed.

He cleverly steered his company through the GFC by setting his sights on becoming the top alternative lending brokerage in the business.

“[The market crash] brought forth a clarity of vision in terms of maintaining resilience … You need to have control of the client, or the money, but preferably both”

You need to have control of the client, or the money, but preferably both,” Allen says. That year, he homed in on alternative mortgage lending practices and formed partnerships with private investors and lesser-known lenders. 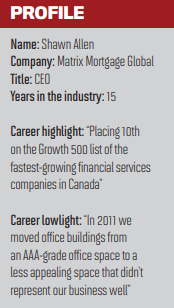 He forged connections with that specific customer base by investing in early advertising e‑ orts, something most brokers usually balk at.

“Building this framework for resiliency in the market and maintaining integrity in our solutions-based lending practices has always been our mission,” he says.

Allen learned how to adapt, be proactive and embrace change, skills that have served him well as the market has evolved over the last decade. 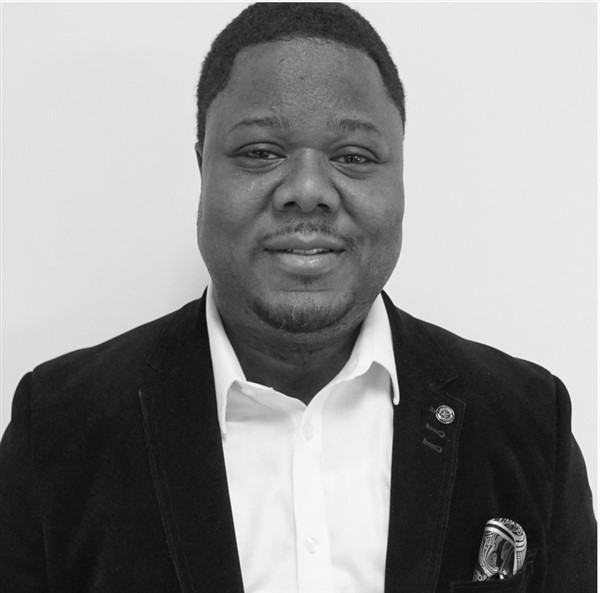 When house prices started to swell in the key urban areas of Toronto and Vancouver, the Canadian government took critical action to blast some of the heat out of the real estate market. It intervened in 2016, and again in 2017, tightening guidelines around how lenders qualified borrowers.

The changes included a 15% tax on foreign buyers in the two provinces where those cities are situated (with some regional governments following suit); a legislated ‘stress test’ that required borrowers to qualify at two points above prime rate for income-to-debt-servicing ratios; and more stringent credit and down-payment requirements.

These changes, combined with investor speculation that the market was due for a correction, led to across-the-board decreases in maximum loan-to-value amounts and a dramatic slowdown in foreign buyers.

It felt like almost overnight home values had dropped by up to 20% in some jurisdictions, Allen says. The sweeping reforms also made it harder for borrowers in rural and suburban areas to break into the housing market and refinance.

“Our focus on alternative lending meant record-breaking sales for us and a signifi cant increase in business. Our business went up as many brokers scrambled to fi nd new lenders”

“The regulatory changes sent some brokers’ businesses to a screeching halt as their once A-clients were now barely qualifying with the B-lenders.

Suddenly the private mortgage market share surged from 3% in 2015 to 8% in 2018, accounting for 20% of the refinance market in some urban areas,” Allen says.

Fortunately for Matrix Mortgage Global, which had already diversified its approach by focusing on existing homeowners and equity lending, the changes worked in its favour. “

Our focus on alternative lending meant record-breaking sales for us and a significant increase in business.

Our business went up as many brokers scrambled to find new lenders, new ways of underwriting, and new client expectations to manage. For us, this was all business as usual.”

As volume grew, however, Allen faced other challenges.

He had to quickly scale up his brokerage’s infrastructure to meet increasing demand, while becoming more effective at tracking leads and improving conversion rates.

This involved training staff on underwriting and transforming the company culture to focus more heavily on documentation and protocol, among other changes.

Change never comes easy, but Allen has come to understand and accept the period of trial and error that comes with putting new measures in place.

And no matter how difficult it may be, it’s always worth giving it a go.

In 2017, while the government was scrutinising lending policy, Matrix Mortgage Global expanded its operations Canada-wide.

Once leads started flowing in from British Columbia and Alberta, his team had to familiarise themselves with those provinces’ lending guidelines.

“Local brokers were initially outperforming us, and our conversion rates were not as good for those areas, but our experience and effort to make connections and gain a deeper understanding of new markets has begun to level that out,” Allen says.

In the last 11 years, Matrix Mortgage Global has seen many ups and downs, but thanks to Allen’s dynamic leadership style and willingness to take chances, he’s been able to confront these challenges head-on.

Allen can’t predict the future for Australian brokers, but he does know that those who want to ride it out need to embrace change and adapt – after all, look where it got him.