Sticking together to conquer challenges

Get Real Finance director Kelly Cameron was set to retire at 30, but there was something about broking she just couldn't quit

Shortly after obtaining her undergraduate degree in international business, Kelly Cameron moved to Korea for a gig at a merchant bank. A couple of weeks later, the 1997 Asian financial crisis happened. With her Korean language skills and financial education, she became an incredibly valuable asset to the company.

While navigating that experience was eye-opening and rewarding, Cameron decided to return to Australia, where she got a coveted job at a big four bank. She worked across a number of departments and gained valuable technical knowledge about how mortgages work and are processed.

Passionate about making a difference at a grassroots level and helping people better handle their money, Cameron left the bank after a year to become a mortgage broker. She set a goal to retire at 30 and managed to achieve that on her birthday by selling her first mortgage broking business in Brisbane. But her ‘retirement’ didn’t last long. After just six weeks she launched a new business venture in Sydney. In 2005, Get Real Finance was born.

Being in a new city, Cameron had to build her client base from scratch by attending events and networking. She ended up writing $60m worth of loans by year-end. Two years later, she decided to move back to Brisbane with her business, and employed three more staff members by 2011. Now she leads a team of seven.

Cameron has built a considerable property portfolio, and her clients benefit from her extensive experience in real estate purchasing and investing. She has helped people from virtually all walks of life – from those looking to save for their first home to those trying to get their lives back together after a tragedy.

While Cameron considers staff management extremely rewarding, she says it’s also one of her biggest challenges, especially during di cult periods such as times of regulatory change. However, her team deals with industry challenges by openly talking about issues that come their way, and by focusing on moving forward.

No matter the problem they’re confronted with – whether it has to do with a loan application, the lodgement process or an issue within the team – Cameron’s group of talented and tireless colleagues band together to find a solution. It’s that collaborative approach to problem-solving that she believes makes her business stand out from the competition.

“We stick together as a team, and we’ve kept our culture, despite changes inside and outside our business,” Cameron tells MPA. “We workshop ideas and we apply them. That is how we keep achieving and overcoming hurdles in the industry.”

Cameron has learned the importance of dealing with upset staff members right away, and why sometimes letting someone go is the right thing to do, even if it doesn’t feel like it at the time. 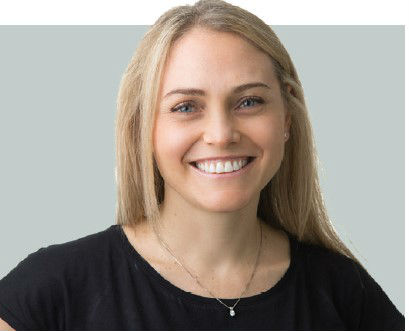 Growing in number and skills

In the near future, Cameron plans to change some internal roles and bring more people on board, including a new broker. She’s already got someone in mind, a student who she will train over the next few months.

On the operations side, she plans to upskill her office manager next year so they’re able to perform more accounting and finance work to better drive the business.

To further spur productivity and growth, Cameron has booked a customer service specialist to come in and give her team tips on where they can improve. She’s also begun using voice memo, which she says is a faster way to capture her ideas before they drift away.

In addition to expanding her team, Cameron is looking at growing the commercial fi nance side of her business and expanding its insurance referrals. Her team has already begun to take action towards that goal.

Her advice to brokers who are just beginning to grow their business is simple: write a business plan and find mentors you can share ideas with and depend on to help you bring those ideas to fruition.