The argument for increasing gender diversity in broking hardly needs to be repeated, yet figures continue to show a decline in women entering the industry, and the number of females remains below a third of the entire broker population.

According to the latest Industry Intelligence Service report from the MFAA, in the six months to September 2019 the proportion of female brokers rose by just two basis points from the six months previously, to 27.2%.

While the broking industry as a whole saw a drop in broker numbers, this was felt more sharply in the female segment as just 281 women were recruited as brokers during the period, in contrast to 630 men. This continues the steady drop in females entering the industry since the April–September 2017 period, when more than 500 female brokers were recruited.

Belinda Wright, executive manager, broker partnerships, in Westpac’s mortgage broker distribution team, says the industry has improved to include more flexibility and roles for women in broking. She adds that the option to work flexibly is becoming much more mainstream, including at Westpac where 74% of employees work flexibly.

“It’s vital for the industry to be highlighting the benefits of women becoming brokers, such as being able to make a difference to people’s lives” Belinda Wright, Westpac

She admits, however, that there is still a lot of work to be done to see women represented in broking at the same levels as in other industries. To encourage an increase in these numbers, she says, “It’s vital for the industry to be highlighting the benefits of women becoming brokers, such as being able to make a difference to people’s lives by helping them get into their own homes; the fact that the work is challenging and every day will be different, and there’s flexible working hours and the opportunity to be your own boss.”

Seeing the declining figures, the MFAA began its Opportunities for Women (OFW) initiative back in 2018. Jane Counsel, Executive Central Group’s principal consultant, has been leading the MFAA’s research and working groups from the start. She says increasing gender diversity in broking is “not a quick-fix solution” but something that requires a continued and sustained focus by the entire industry.

“The MFAA research is telling us that retention is the key opportunity to focus on in the short term,” Counsel explains.

“We have identified an opportunity to provide additional support for our female brokers through the development of a peer-to-peer support program that will be launched later this year” Jane Counsel, Executive Central Group

“In the MFAA’s 2019 OFW Survey we found that women were more likely than men to report that their experiences around flexibility, earnings potential and development opportunities had not met their initial expectations. Therefore, we have identified an opportunity to provide additional support for our female brokers through the development of a peer-to-peer support program that will be launched later this year.”

Fighting against the stereotype

For Wright, the benefits of gender diversity are “clear”. She says a workforce that mirrors your client base drives increased levels of customer service and satisfaction; diverse teams challenge the status quo and drive innovation, and teams that are inclusive see greater levels of employee engagement.

While there can often be a stereotype of finance being a man’s world, Wright says women should not feel that they need to change who they are to be taken seriously.

“Women do not have to ‘become more like a man’ or choose their career over their family,” she says.

“I have been lucky to be mentored by some extremely strong, intelligent women who have become exceptionally well-respected women in the industry, all while raising a family.”

As the industry looks to encourage more women into broking – and to keep women in broking – Wright says there are things that brokerages can do when they recruit.

“I would encourage broking businesses to identify potential unconscious bias in their recruitment processes, think differently about the talent pools they recruit from, and challenge themselves to aim for gender equality on recruitment shortlists,” she says.

From a female broker’s perspective, Loanezi managing director Renee Tocco loves being a broker but says she has faced challenges. As a business owner, she has “quite accidentally” employed an all-female team, hiring staff based on suitability and cultural dynamic.

“I can certainly tell you that my team are all equally committed to the brand, to the vision and to our endeavour to grow,” Tocco says. “They work relentlessly under my leadership, and together we are an unstoppable force.”

She adds, “I do believe females need to stick together, give each other a leg-up when we can, and help shift the equality ladder sooner.”

In the effort to encourage more women, Wright says Westpac is working closely with aggregator groups and looks out for opportunities to support them in any diversity and inclusion events they might be running.

Internally, the Women of Westpac employee action group supports female staff in reaching their full potential through engagement, education and empowerment. There are dedicated leadership coaching programs – ‘Making My Mark’ and ‘Women on the Move’ – “to help women build confidence in their capability, personal brand and networks”. 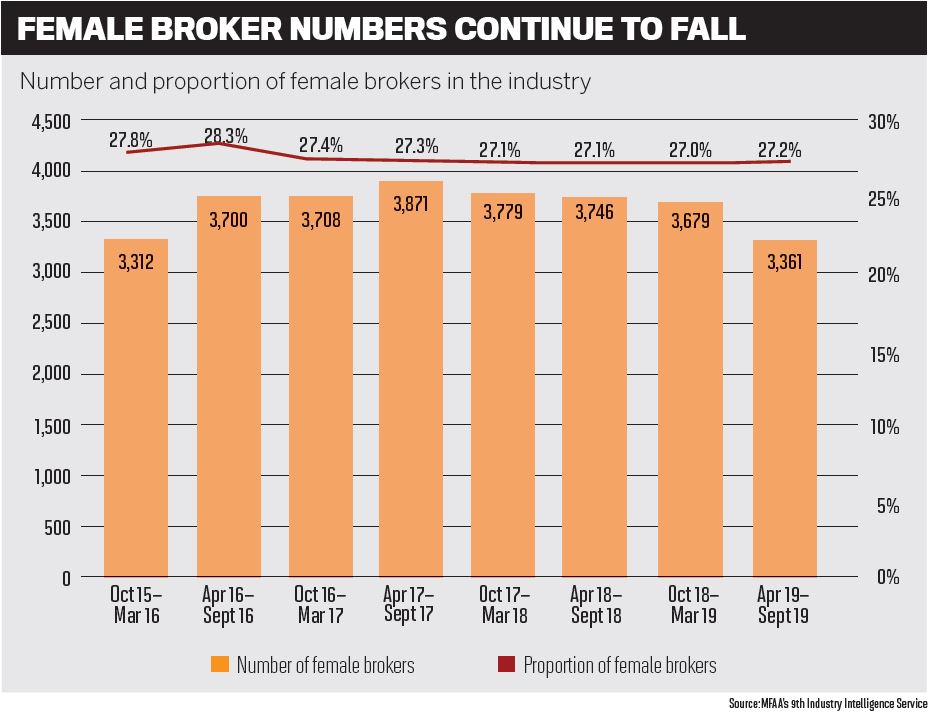 Wright adds, “We also offer initiatives to support women at all stages of their career, including flexible work arrangements, paid parental leave, paying super on unpaid parental leave, and our program supporting employees with caring responsibilities.”

Going beyond just focusing on its staff and the industry, Westpac has also set up Ruby Connection, an online community for women across Australia where women can come together and become more “financially savvy and confi dent about what they can achieve for their futures”.

“I do believe females need to stick together, give each other a leg-up when we can, and help shift the equality ladder sooner” Renee Tocco, Loanezi

Loanezi’s Tocco has also been involved in events for women in the industry. Working with the Commercial and Asset Finance Brokers Association, she says the Women’s Forum is “one of the most rewarding endeavours” she has ever started.

“Many women in the commercial finance sector rarely engage with professional development days, due to family commitments and the stigma, but this has brought us all together,” she says. “We have so many incredibly successful women, completely out of the limelight, who are connecting and actively engaging in the finance broking sector.”

Rather than making its Opportunities for Women initiative a one-off event, the MFAA has continued its work and is now in its third year of producing research and holding workshops. Counsel says the organisation believes it is an opportunity to improve the sustainability and future viability of the industry.

“Increasing the gender diversity of our broker base will ensure that we as an industry are better positioned to anticipate and respond to the diverse needs of our customers,” she says.

Counsel adds that the MFAA is already seeing small but important changes in terms of the perspectives of its members, but she encourages everyone to understand the role they need to play in ensuring that the industry is inclusive of everyone.

She says, “That involves us thinking about what we traditionally value in terms of success, the role models that we promote as being successful, how we behave at industry events, how we call out and celebrate the contribution of our female brokers, how we call out bad behaviour, and how we promote the many wonderful things about working in this industry to women everywhere.”