A shock Productivity Commission recommendation that trail commissions be banned could decimate the industry if implemented, argue leading brokers

The Australian Lending & Investment Centre may be one of the leading broking businesses in Australia, but managing director Jason Back says the removal of trail commissions could have “serious ramifications”.

“We would need to have a serious look at our cost structures and review options like having a smaller support staff, or review our location and premises; our cost-to-income ratio is a measure that we always keep an eye on,” he says.

Having built a successful single-broker business over 15 years, Daniel O’Brien, of PFS Financial Services, says that, while banning trail wouldn’t kill his company, it could affect his ability to provide quality ongoing client service.

“Because I have an existing trail book and we do on average about $15m a month, I could survive on upfront commissions,” he says. “But what will happen without trail is we will earn less, which means we can’t have as much infrastructure and resources that are about delivering ongoing service and value to clients.” 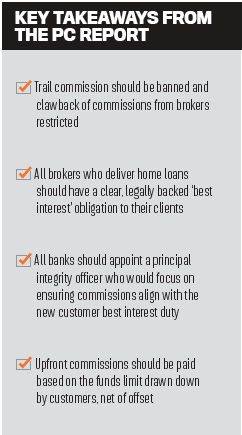 ProSolution Private Clients director Stuart Wemyss argues that the removal of trail commission on future loans – assuming the measure would be grandfathered – would create unsustainable business models for 95% of existing brokers.

“If all you have to rely on is upfront commission, forget about it,” Wemyss says. “Brokers, at best, probably make a small profit on the upfront commission. In many cases, they just break even, and then on some deals make a loss. The upfront pays for all the time and effort you take in acquiring that customer and getting the loan settled, and the trail is typically the profit – that’s how most businesses operate.”

In the post-GFC environment, with the combination of commission cuts and banks pushing more of the transactional administration onto brokers – like valuations – brokers now do much more for less. Recent regulatory intervention has also made brokers’ jobs more time-consuming, and Back says there are now more loans “out of the box than in”.

Funding growth, business acquisition and marketing could be out of the question on upfronts, and based on research showing that 40% of financial planners might leave the industry once a degree is required to practice, a similar mass exodus may face the broker market.

“I’d imagine if trail commissions were removed you would probably be looking at a similar sort of result, and it could be even more than 50%,” Wemyss says.

“Well-established businesses like us can tinker with the model, but what about the new and up-and-coming guys?” he says. “It’s not going to be as attractive or appealing to come and stay in the industry. The thing about making good money in a profession is you get the best people; if brokers are paid a lot less, we won’t be able to retain talent.”

The MFAA has suggested upfronts may increase to 1.1% in response to the abolition of trail, but even if this did happen, it would put the ‘client for life’ mentality at risk.

“If there is a higher upfront commission, for example, that would help, but I’m concerned this would change it into a transactional relationship versus an ongoing relationship,” Back says. “You might get more upfront today, but there would be no onus on a broker to provide service on an ongoing basis.”

Wemyss agrees. “The transactional approach to financial services is what has got us the royal commission,” he says. “It’s really been that focus on getting the transaction settled and getting the commission and moving on to the next deal.”

“The end result would be inferior service for the client, who will not be paying less and may even end up paying more without a broker as banks gain more market share” Daniel O’Brien, PFS Financial Services

If there’s no trail, he says, there’s a strong financial incentive to move on, which “dramatically reduces the value proposition that brokers provide”.

O’Brien argues the change would add up to a bad deal for clients.

“Are the banks going to reduce their rates? No, they will pocket the extra money. The end result would be inferior service for the client, who will not be paying less and may even end up paying more without a broker as banks gain more market share.”

Brokers would need to charge a fee in most circumstances to survive, Wemyss argues, which could be a one-off advice fee or an ongoing-relationship style fee.

“That is going to be hard for most of the broker population to do where they just have mum and dad, a mortgage and one loan, but if you have investor clients or a deep niche in a particular market that sees value in that, then that’s when you are going to be able to do that,” Wemyss says.

Back agrees. “Fee-for-service for the standard residential market won’t work, because as research has shown customers can get their advice and then walk down the road to a bank branch and transact somewhere else. In the non-conforming space there is an opportunity, but for homogenous purchases like refinancers or first home buyers, a fee could be a distinct disadvantage.”